A highlight of his work has been designing self-sustaining communities of exploration, ideation, and experimentation. We spoke with him recently about building a culture of innovation, how design thinking works in tandem with other methodologies, and why a meeting with Mickey Mouse just might spark some entirely new ideas. 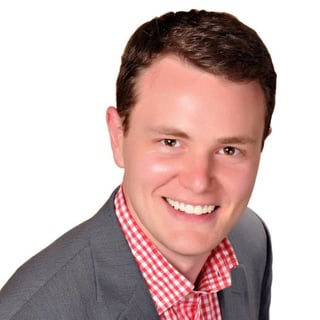 What does a day in your life look like?

It’s never the same day twice. I really bounce around between evangelizing and practicing. I try to spend about fifty percent of my time facilitating events or ExperienceInnovation simulations and working with people afterwards. I don’t like to call them classes or trainings; I like that vernacular—simulations. Because it really is about the experience. The experience makes it truly valuable and unique versus any ordinary training.

I’ve done a lot of full-day seminars now, moving away from the half-day model. We always start with ExperienceInnovation, playing the simulation as it was originally intended. In the second half of the day, we work on a real internal challenge customized to the participants & teams in that simulation. People start to apply the methodology to their own challenges and you can see the gears turning in their heads.

My other days involve me practicing design and getting people interested in thinking like a designer. For example, I was recently in a twelve-week design sprint looking at the sharing economy more broadly and how we might reduce risks. I helped lead group interviews and observations with Uber drivers, Airbnb hosts, dog-walkers and everyone in between. We even took a week away from our day jobs to fully immerse ourselves in the lives of a sharing economy provider!

It’s important to practice what you preach and doing more short & long-term IDEO-style projects really helps. It’s cool to say, “Remember when IDEO made the Swiffer?” It’s even better to say, “Hey, I have these three photos from a recent project we worked on that showcases how real users interact with Liberty.” Or “We created this end result.” It’s super powerful, both the training and being able to supplement with personal stories.

I really love it when you can connect to a group and that group is open to connecting with you on more than just an intellectual level. I love making an emotional connection and showing them that things can be done differently in a super simple way that they innately probably know. Seeing individuals realize that design thinking isn’t mind-blowing or something they need to memorize all the steps of, but is something that is inherent in their ability, is amazing. 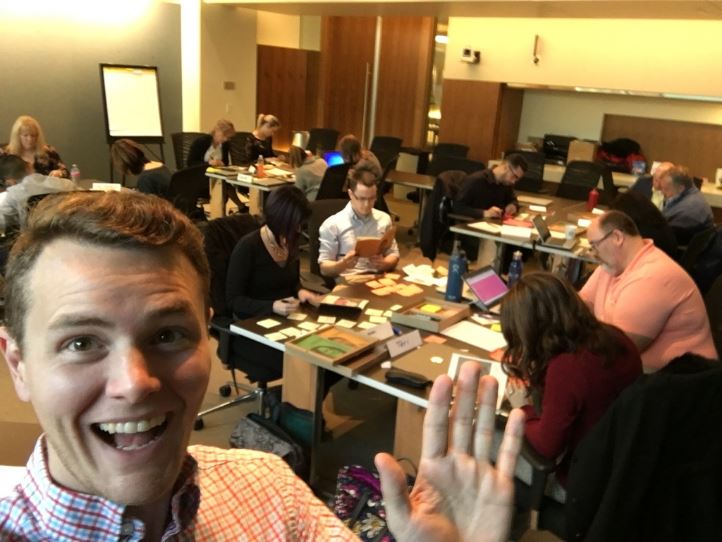 We’re all innately creative. As people reconnect with their creativity, they realize what they can do without thinking too hard about things, what they can do just by building to learn—doing just enough to get a reaction and putting stuff out there. Once they start to do some of those things, I can see those light bulbs turn on.

I like facilitating within and creating a decentralization of innovation. A lot of times in large corporations, there’s a push to get everything centralized, to get best practices centralized and push it out to everyone else. That’s the antithesis of what innovation should be, in my opinion. The more we decentralize, the more people we have practicing, the better it is.

I want to train others within Liberty to practice and use design thinking because I don’t want to be the guy. I can’t be the guy. There are 55,000 other people within the organization! The more I can empower and enable, whether that’s through actual trainings on a large scale or giving them the power to help other people, is hugely rewarding. You can learn from each other’s shared experiences. I’m only one person and I can only go on so many projects, talk to so many people. But if there are all these people spread out, with so many learnings being generated, that’s so much better. You have so many richer stories than just one or two people’s.

Why is teaching others how to innovate important for you?

There are a few slides that we show in the second half of the day. Those are the slides with the scary statistics such as, “Forty percent of Fortune 500 companies won’t be around in ten years.” So, it’s really a necessity to change. So that’s one half of it; part of the change process is creating the need for change.

But there’s also showcasing what innovation could be—showcasing Lemonade Insurance, who’s a competitor. That fires people up. They say, “Hey they’re doing it in 90 seconds with three-minute claims. Surely we can up the ante and beat that!”

On the other side of necessity comes hope—the joy of it. You can’t scare someone into wanting to do something. You have to make it desirable at the same time. It’s connecting people with this innate ability to be creative. If I could coin the ABCs of design thinking, it would be, “Always Be Creating.” Keep it super simple and just share the gift of creation.

What was you most impactful facilitation experience?

There have been a lot of really good ones. The best ones are the ones where I empower participants to empower themselves. Maybe I spend a couple of days, and then it just builds in and they take things forward. I may not necessarily see the end product. I see the end product as the people and their mental shift in their capacity to create change amongst themselves. It’s harder for an individual, so it’s better if you can light that fire in a couple of people working together.

It’s the easiest, and sometimes the most rewarding, when we work with our new hires group. They are always filled with crazy ideas, and giving them the ‘crazy’ idea that Liberty will support them to go and run with these concepts is really cool.

We host an annual hackathon and we are seeing those we’ve trained use their design thinking techniques as a competitive advantage. They bring robust, user-centered ideas to the table. They create something that’s powerful for the end user but that also connects with the judges because its feasibility centered.

So the new hires tech startup groups are pretty awesome—seeing them apply new ways of approaching challenges is creating waves within Liberty.

What are your outlooks for design thinking?

I preach design thinking not as a methodology but as a set of principles, a set of guidelines and practices to live by. I see it being adopted into Lean methodology, asking how a new startup fits into that, and looking at the commonalities there. There are so many—incorporating Lego Serious Play into some things that we do, perhaps. You can use any methodology that someone is interested in related to innovation and bring it back to all of the principles of design thinking.

I think the future of design thinking and innovation is in a shared set of principles. I don’t want design thinking to be that fad that management in big corporations have every few years, where they say, “Ok, this has objectives, and this year we’re going to talk about innovation and we’re going to do design thinking.” Then everyone gets sick of it and moves on to the next thing. That happens from too narrow a focus. If we can broaden design thinking into what it is—a way of thinking—if we can expand it to be beyond the seven steps or ten steps or five steps. That’s what I want to preach and teach.

We’ve recently formed an innovation forum at Liberty, so now we have some top-level executives coming together on a routine basis and igniting that fire. We’re creating opportunities for selected groups and communities to come together if they are interested. It’s not a push mentality, but a pull: If you’re interested, come join, come see what we’re about. We’re seeing more and more people adapt to that model.

Do you have any rituals prior to facilitating? 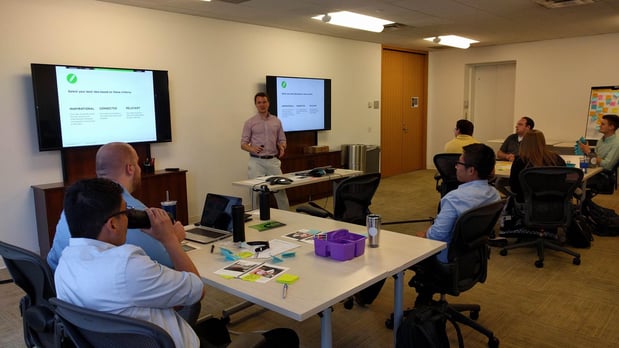 I do have my facilitation shirt. I wear it to every simulation, unless I have back-to-back engagements. I wear the same Vineyard Vines shirt that’s super colorful. I draw a really awful stick figure on whatever whiteboard is available to show that you don’t have to be good at drawing to do this. It’s easy to draw my shirt because it’s a bunch of red, white, blue, and green stripes thrown in there. It’s super obvious who I am with a “big ole stick” figure with my name on it. It says, “Hey we can be bad at drawing and still be creative!” and it’s become kind of an identity for me, that shirt and cartoon.

If we peek inside your facilitation bag, what would we find?

You would find a lot of extra handouts, just in case. There are a lot of smiley face stickers as opposed to the larger stickers, because a) they’re a lot cheaper and b) smileys are a lot more fun.

We have put together a master binder  for our team of ExperienceInnovation Facilitators. It has laminated pages so facilitators can flip through it. We have an emergency USB in there and it has a piece of duct tape over it that says, “Break in case of emergency,” kind of like a fire extinguisher. If there was a fire, you would break open the glass. In this case, you break open the duct tape and have everything you need, ready to go.

There are Post-it® notes from all of our facilitators that have used the binder. So everyone is building on the ideas of others within that binder by leaving their notes, their own techniques, their own “This worked well; this didn’t work well.” It’s a cool community thing that all of the facilitators have together. We’ve had to create a couple because we have events that are coming up that happen on the same day, but we have a core binder that holds our best practices, tips and tricks that are internal and totally proprietary—you can’t have them! (laughing)

What are you most proud of?

This is, again, something I can’t take full credit for, by any means. We’ve grown our community—our design, research, and UX community—from four to 17 people. That has allowed us to do so many amazing things and gives us the ability to have groups of people go into a project together, which is awesome. When you’re going in alone, it can be hard to get that credibility. You need that other person who “gets it” to back you up and say, “Oh yeah, I’m going to draw really bad stick figures on this Post-it® note and put it on the board.”

I’m proud of the growth of our team. It has led to the greater impact we can create for others. We’re already seeing that impact reach even further.

If you could work alongside someone for the day who would it be and why?

Good question. The obvious answer is Elon Musk or someone like that. But I don’t know...maybe someone like Mickey Mouse. It would be so weird, and you would get a whole different take on absolutely everything that you are doing. So, someone that is completely different. Mickey Mouse is obviously a fictional character, but I feel like he would see the world from a whole different viewpoint and be able to point out things in his world, a complete fantasy world, that we could then potentially incorporate into the real world. So, Mickey Mouse, if he was real. I guess there’s a little caveat there.